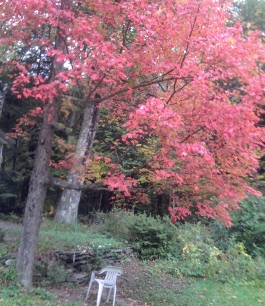 Is it really that time already? The leaves only just came out. (Excuse the blurry, tilty phone picture. At least the red is there.)

Today my endlessly drifting self has drifted over to 27 Good Things. Come visit me there. It’s a good place to be.

The title kind of says it all.

However, if you want more, it was a good trip. There were seals, and spider crabs, and clams that we watched burrow into the sand, and more seals, and whales, and, cue Jaws music, a large shark cruising right along the shore while my husband and daughter walked on the water’s edge. There are no pictures, not mine at least, because I am the sort of person who would put a camera down in the sand and forget it completely until the tide came in and washed it away, if anyone were foolish enough to give me a camera.

And now it’s over, and the sunlight tells me fall is racing its way here, and…sigh. It is hard to let go of summer.

I spent too much time thinking about a project that I really shouldn’t start, but will probably have to now. Some stories wait politely in line, some shove their way to the front and argue loudly until I agree to write them. More on it later, when I’ve slept in my own bed a night or two, and the cats no longer have to cling to me and tell me how terrible I was to ever leave them.

In the meantime, if you’ve had a vacation this summer, please, tell me about it. I’m a better reader than writer at the moment.