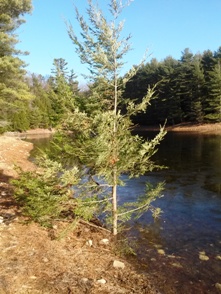 Yesterday we hiked along the water. We found a fallen hemlock and planted it in the mud there, decorated it with stones and fungus, dried oak leaves and ice crystals. Beyond, we came to a flock of chickadees in the trees, and for a moment I was surrounded by the sound of wings as they flew past, investigating. On our way home, we paused to watch otters in the water. They watched back, snorting in…disapproval? Invitation? Curiosity? Further out was a loon, and ducks floating beyond the reach of the forming ice.

This morning we woke to a solstice visitor, one we often hear but rarely see, sitting on the deck railing as the snow fell. 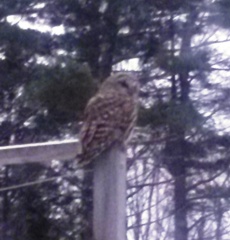 Today we spend outside, looking for tracks, leaving seeds, finding light on this, the darkest day, before returning in to roast vegetables, bake pie, light our candles and enjoy the warmth. It’s good to be in this place, to connect to the land, to one another, to feel both the change and the sameness of life.

Be well, everyone, and blessings to you all. Feet to the soil, faces to the wind, hearts open to the need around us, and hands prepared to work for the good of this world.

My car started having problems. Not the shiny new used one, the one we haven’t even taken possession of yet. No, this is the one that has been the good one, up until this week, the one with only 218,000 miles on it. (A side note: I hate cars. I hate being dependent upon them. A future full of bikes and trails, even full of carriages, would be fine with me, but that is not the life I live currently.)

Anyway, the good car suddenly started having electrical blips, which turned into full car blips, which led to us all sitting on the side of the road this afternoon. This has become a disconcertingly familiar state for us lately. I was happy to be able to reach a pull off, happy to be in a cell phone friendly spot, happy to have my dad available to pick us up. All in all, not a bad breakdown.

One little glitch? My dad could only take two passengers, so I hung out in the woods for a while by myself. Again, not a bad thing to do. Crunchy fall leaves, shifting clouds, an old oak crumbling into soil. Fresh air, which I sorely need.

After a bit, I walked back toward the road and sat on a rock. I was close enough to watch for my ride, far enough not to feel like I was sitting on the side of the highway. A guy stopped and wandered off down the trail I was sitting by. I waved, he waved, the sound of him trailed off through the leaves.

The traffic kept going by. A truck, and then something through the trees, big like a truck, only in the wrong place. I was thinking truck? Then someone else in the woods? Running maybe, through the trees? Then, as my brain caught up with my eyes and ears, oh yeah, big, BIG moose. Running. Toward me.

It’s not really rutting season at this point, but that’s what I think about when I see a large moose with monster antlers running toward me. Rutting season, for those unfamiliar, is the time of year when bull moose become irritable. Really irritable. All they want are receptive female moose, and everything else gives them the equivalent of road rage.

I was off my rock in about the time it took for big BIG moose to sink in. With extraordinary grace, I leaped behind a sufficiently large tree, checking out the deadfall next to it to think about how much it might slow down a grumpy moose. I looked out around the corner as the moose came to a sliding halt. He looked at me, I looked at him, he spun around and ran off again. His legs below his hocks were much lighter than above, and they startled me as he vanished among the trees.

I glanced back down the trail. Hiking guy had paused there. With the crashing sounds and leafy crumples that accompany a running moose playing as soundtrack, we embarked on a game of charades. I pointed at the moose’s trajectory. He raised his shoulders. I stuck my pointer fingers up along either side of my head. He held his thumbs to his head and spread his fingers out wide. I gave him a thumbs up.

My sincere hope is that he got moose from all that. I suppose he could have been thinking coatrack, or, perhaps, explosion. I’ll never know. He ambled off along the trail, my ride arrived, and we all went on our separate ways.

If you are lucky, there are windows. They open from time to time, just long enough for a splash of sunlight on your face, a reminder that there is fresh air waiting to be breathed, fox tracks still to be followed. You learn to collect moments like these and store them in a box labeled Hope.

This weekend I walked down to the beaver pond as night was falling. The beavers that live there spend much of their time damming up the culvert that passes beneath the road. The town works crew spends far less of their time ripping the dam out to keep the water off the road. The pond is in three tiers though. The furthest back is on protected land, the gift of a modern-day hermit who used to live in a small structure there.

I went to the far end of the back pond and sat by the water. I could hear the stream faintly there, but nothing else beyond the traffic from the road, the barking of dogs. After ten minutes or so, a flock of ducks were spooked up out of the water. I could neither hear nor see what drove them up. The coyotes that live in these woods are perfectly capable of watching me from mere feet away without me ever knowing. I take comfort in that, in the resilience of life here, whether I see it or not.

On the way back, I’m thinking about trees. It is that moment in nightfall when the trees are perfect against the almost dark. If I were a painter, I think I might spend my entire life trying to capture it. Especially this time of year, when there are no leaves to hide the lines. Somewhere our flock of turkeys are sleeping, but they are as hidden to me as the coyotes now.

The moon is up, a silver crescent. The air is cold, and I’m thinking about how my small daughter spent the previous night sleeping in a sleeping bag under the stars with a group of girls and women. She fell asleep with that moon above her, and woke in the morning to frost on her bag, and right then there is nothing I want more than to take the same sleeping bag and find an open field and spend a night there like I haven’t for far too many years.

Around the corner is my house, with the light from the windows streaming onto the lawn. My children are chasing each other out there–my daughter, who is learning to challenge her fear of the dark, and my son, who is growing into the kind of man who looks at his mother and tells her that she should always write whatever makes her happy, because that is the only reason to write. Inside, my husband is washing the dishes. I watch them all for a minute from the dark. They do not see me.