A farewell to Phoenix 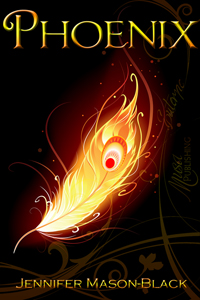 Remember this cover? I love it. I actually love it so much that even though my original idea was something grittier–an old gull feather, gap-toothed and roughened, turning to flame–and even though the font suggested something other than a story about three kids living oh-so-briefly on the street together, I gave an enthusiastic yes as soon as I saw it. I have it framed and hanging over my desk, courtesy of my brother.

Phoenix was an experiment of a story. It was also an experiment in publishing for me. The number of markets for novelettes is…small. I tried Giganotosaurus and got a nice rejection with a try again note. (I did, because that was the year of two novelettes. Luckily The King’s Huntsman found a home there a few months later.) I sat around for a while, wondering what to do with it. Well, to be honest, it was less thinking and more putting it in the file of things that I don’t what to do with, because that’s how it goes sometimes.

I considered self-publishing it. (That’s where my cover idea came in.) I read up on it. I talked it over with Dear Spouse. I thought about it more. In my heart, I knew the answer. I was chicken. At that moment, it was easier to think about burying the story than it was to think about putting it into the world on my own.

Then Musa came along. It was new, it was e-book only, it was open to all sorts of stories, at all sorts of lengths. Their contract was available to read online, and it was easy to understand, and they provided covers and formatting and editing and split story profits 50/50. Given my status as chicken, and my dearth of options, I decided to submit it there.

I never thought of it as a young adult story, but it ended up in the hands of the YA editor at that time, and she provided me with a very persuasive argument for why it was. She agreed to a few amendments to the contract, I signed it, and Phoenix was birthed as an e-book. A very short one.

It’s a gamble working with brand new publishers. Don’t ever assume it isn’t. I submitted Phoenix because it was a novelette, the equivalent of a few days work for me. I signed the contract because I asked them to remove the clause that gave them right of first refusal on any related stories. See, Phoenix is kin to Wren and The Lost. Secret kin, kind of like the royal child raised far from the castle to avoid the violent intrigue within. I was happy to gamble with a novelette, but not with one of my novels.

The contract was for three years, and would have ended this May. Things have sped up. Musa closes on February 28. It happens, to many many presses of all kinds. When I signed my contract, I did so knowing that the odds were against them.

The odds were against Phoenix too. My sales goals were low. I was pleased to exceed them. I had a very small, very manageable experience of marketing an e-book. I learned a little about how to do that while working with my personality, which is not of the “BUY NOW, BUY BUY BUY” variety. I had an e-book with a beautiful design, and it taught me gratitude to the people who think about how a story is presented, who make an art of it.

It’s been good. And now it’s just about over. Phoenix is still available through all the various online vendors through the 28th. It’s on sale at Musa, 80% off, which I think brings it down to $0.40? After Saturday, the rights return to me. The cover returns to pixels. The story settles back into my files, resting among its Aware brethren. I don’t think it will stay there forever, but it will for now. I hope to someday have an Aware story collection, and Phoenix would certainly be part of it.

But for now, a pause. A passing.

Remember: The thing about stories is that they’ve got to have hope.