In the last four weeks, two things of interest have occurred in my personal life. First, a three-foot-long milk snake appeared in my bedroom and vanished into a hole in the wall. No amount of coaxing would bring it back out.

Second, I spent a week in Hamburg, followed by a week in Amsterdam. In Germany we stayed in a posh hotel with a front desk staffed by people who addressed my husband by name when he approached with questions.

In Amsterdam, we stayed on a houseboat.

Still processing all the experiences. I’ll write more in the future. For now, the view from the houseboat window as a boat passed along the canal. 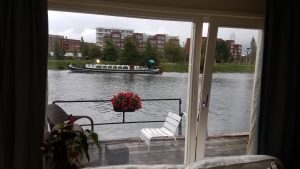