A few years ago, my bio said something about living with a menagerie of elderly animals. They left us one at a time, one heartbreaking October after another. Their farewells are here, and here, and here. Each loss felt too huge and too hard, and we all broke a bit, just as we’re made to do when grief settles in.

As is clear in Ripley’s link, we didn’t remain catless for long. I’d never been a cat person. I swore I would never have another cat as ours got older and older. However, with both cats gone, and a rapidly failing dog, and two kids learning to cope with death, I thought that maybe a cat would help us. Had I been honest, I would have said that I thought a cat might help me. I needed a young, healthy companion, one that didn’t need a special diet, or SQ fluids, or constant monitoring.

Enter Coco. She was long, she was sleek, she had giant paws with too many toes, and she’d flop on us and relax to the point that she would simply slip off our laps. She was nothing like our other cats, and it took some time to figure out how to love her. The holes in our hearts weren’t Coco-shaped; we needed to make new space for her.

What we also discovered is that while she was exceptionally friendly and outgoing at the shelter, she was terrified of rapid movements and loud noises and anything that wasn’t a running mouse or a human lying still. No big deal. Old Lady Dog didn’t move much, and Big Kid could learn not to run up and down the hall on his way somewhere, and life worked out.

But then came Baby Dog. I’m embarrassed to discover that Baby Dog did not get a welcome here, and she’s been with us for closing on eighteen months. I guess I should do a picture? All my other ones are of her sleeping on the kids, or her caught in mid wiggle, so here is her Very Still Like I Am Dead pose. 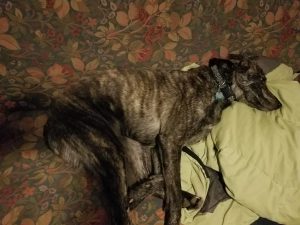 (Coco is on important cat business somewhere in the house, so I can’t offer the same for her.)

Baby Dog is two, but it’s a very shaky two. She’s recently learned to spend the night outside of her crate without causing trouble, but most of the time life is a tussle between being good and doing the sorts of things that look like so much fun/taste so very good. In the category of tastes so very good, be sure to include all things that are edible, as well as a handful of things that are not.

Baby Dog also has this whippet blood in her, and when your impulse control is as poor as hers, being able to run at lightspeed is not always a good thing. As evidence, allow me to present the time she got scared when the leash fell and made noise while she was being walked, and she had to run home as fast as she could, on pavement, which was fast enough to tear the ends of her claws off. Or the time she decided to escape on a walk and see how fast she could run through some old barbed wire. Basically, by the end of her life, Old Lady Dog was a snail. And at the beginning of hers, Baby Dog is a cheetah. That same adjustment we went through with Coco has been multiplied hundredfold with Baby Dog.

She also has no tolerance of pain, or the thought of pain, or anything too scary. She once started yelping because we were playing and one of us peoples jumped out from behind a tree at her. She ran down into the bedroom and jumped on the bed (she’s not allowed in the bedroom/cat end of the house) because the oil delivery man was pouring oil in the tank outside, and even though she woofed once, he didn’t go away, and what if he came in and ate her?

And Baby Dog and Coco? A work in progress. Baby Dog thought cats were for chasing at first. We worked hard to correct that idea. So did Coco. First hurdle overcome. But Baby Dog has been heartbroken for the last year because no matter how she bounces and shows Coco her toys, Coco does not play back. Instead, Coco sits atop the chair next to the narrow channel into the living room and hits Baby Dog when she tries to come or go. The trouble is, of course, that training a cat not to hit is so much harder than teaching a dog not to chase the cat in a small space.

The latest wrinkle is that Coco has decided that if everything else is in flux, she’s going to demand more attention as well. Now she will not eat if I don’t sit with her. She’s gone from despising wet food to requiring it. Baby Dog understands that the cat gets fabulous exciting foods. What she doesn’t understand is how that can be fair, especially when she, good Baby Dog, sits so patiently and so well and asks so politely for fabulous exciting foods as well.

Did I mention Baby Dog also believes she should be a lap dog? That she’ll take a standing leap from across the room to get in my lap? At this point, anywhere I go in the house, there’s a line waiting for the chance to sit on me.

It’s taken a while, but I think we’ve got the spaces for these two in place. Yes, most of them involve laps, but whatever works. Their eccentricities may be significant, but so is their charm.