This blog has been the closest thing I’ve ever had to a diary. I don’t journal–never had, never will–but that may be because I already spend a lot of time processing my thoughts in solitude. Writing allows me to bring the internal into the world.

Stephen King talks about a writer’s one true reader–the audience a writer speaks directly to in their work.  Over time, I came to realize that for this blog, that reader was my dad. This has always been a relatively private space in the vast, noisy online world. Readers of small blogs by mostly unknown writers are few, though often loyal. Of those here, the most loyal was my dad. Every time I posted, I’d get an email from him the following day thanking me for what I’d written. Nothing more, really, just thanks. Only once did he break from that private tradition and comment here. Last year, on the only entry I made. Nothing more than keep on keeping on.

My dad died in February. I’d stopped posting over the last year. It was too painful; so much of what I thought about revolved around my dad’s suffering and the fact that he was dying. Beyond that, I didn’t want to infringe on his privacy regarding his illness. I also didn’t want to discuss the obvious: the impossibly huge loss that continued steadily toward me, toward us. So I went silent.

I think that, perhaps, my dad and I were feral in similar ways, though I far more than he. We had three speeds of communication between us: rambling monologues on things that mattered, jokes, and silence. Silence waited in the places most dear to our spirits, settling over us in a boat, or in the woods, or beside the ocean. Sometimes it meant one or both of us was pondering, but just as often we were simply in a place that we belonged and no words were necessary.

Over my life, my dad showed up for me in a thousand different ways. Many of them were practical. Coming to my house after a snowstorm when the toilet wouldn’t flush, then scaling the snowy roof to pour hot water down the vent to melt the packed snow, for example. Years later, when a blizzard again passed through town, Big Kid and I rigged a contraption of roof rake poles and a mason jar and lots of duct tape and used it to pour the hot water without having to attempt the roof. The first step was fixing the issue. The second was to text my dad pictures of what I’d built and to call and tell him how it had worked. I was in my forties and still wanted nothing more than to hear him laugh and tell me I was clever.

Last year we suffered many torrential rainstorms of the sort that flooded basements and sometimes whole houses and washed away roads. We live on a hillside. We have a high water table and a road that has been graded in such a way that much of the rain traveling down it is shunted onto our land. It was a messy time, full of sandbags and cinderblock barricades and shopvacs, but we came through much better than many places nearby. Around that time, I developed a habit of hiking the woods across the road barefoot. I liked the feel of the ground, the springiness of the interlocking rootlets and mycelium and decaying leaves and limbs. More than that, I craved connection with this spongy network that absorbed so much water, held so much soil in place, kept us so safe.

That is how I think of my dad now. As part of a network of root and life and death that holds and protects this place I love so very much.  Because that is how he would choose to be, because that is who he was to me, because he’s gone and it is so very hard to let go.

Once upon a time, long long ago, he and I would wake up in the dark and drive to wait in line to rent a boat on the reservoir so we could go fishing. He took the fishing very seriously, and I had a child’s level of patience and focus, and I would try very hard to be still and to stay interested when the fish weren’t biting. He’d make a nest of life preservers in the front for me, and feed me salami sandwiches–just bread and salami, my choice–and Snickers bars that would melt in the heat, and steadily fill the cooler with fish until he’d reached the legal limit. And then, at some point in the late afternoon or early evening, a change would come. He’d take off his hat and dip it in the water and splash me with it, and we’d turn for home, and he’d try to find the wake of other returning boats to cross because I loved riding the choppy waves.

Part of me is there, is always there, the wind blowing my hair across my face, the sound of the motor and of the water slapping the boat, the cool touch of the long shadows of the trees on the islands we passed heading home, the feel of safety and love and belonging. It’s an echo, one still sounding after fifty years, and one I expect to continue as long as I exist. Perhaps beyond. Perhaps the places in which we have been happy continue to hold joy for much longer than we imagine, just as the melancholy of places of sorrow is so slow to dissipate. In the end, the answers to those questions don’t really matter. For me, it is enough to know that that is who we were, my pop and me, once upon a time. 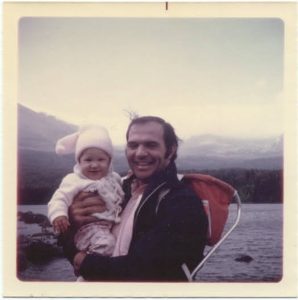