The writing on the wall

This is what hangs on my bedroom wall, my side of the bed: 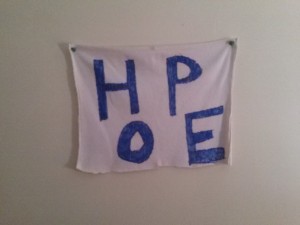 It arrived there one gray afternoon, courtesy of my daughter, who knows the power of words. (She also knows the limits of her mother’s ability to decorate any space; the collage on the other wall speaks to that.) It is the first thing I see many mornings, and what I stare at when the writing doesn’t want to come.

I think a lot about hope. It may be my age. While I plan to have decades still to go, I don’t retain that sense that all choices remain open to me. It may be my mental health, because buoyancy has never been one of my traits, and hope has always been a necessary lifeline. Whatever the reason, it’s on my mind most days, in some form or another.

Last year I read something that stuck with me. Unfortunately, the source has not, because…well, I’ll explain that in a minute. Let me first say that it’s possible that it came from this interview in The Sun. As I cannot locate my copy of the entire interview, I can’t confirm anything, but in the interest of trying to give credit where credit is due, I’m suggesting that it may be the source.

Back to my actual point: in an interview I read last year (that one or another), there was a comment about hope, about the possibility of living a fulfilling life without hope. At the time, it made me angry, which is why I don’t have a reference at hand. Yes, it made me so angry that I stopped reading and erased it from my mind. Hope is HOPE. Life without hope means…giving up. Right? Isn’t hope what gets us out of bed in the morning? Makes us try to do things?

Hold that thought for a moment. We’ll come back to it.

My dog Callie is very old. We thought last year would be her final year. It wasn’t. This year may be it, or she may choose to continue on even longer. The future is not ours to know. What we can know is that there is no recovery from old age, no miracle cure for arthritis, nothing that will make her heart or her kidneys those of a young dog. Our goal is simply to keep her as pain free as possible while respecting her life. A dog’s life, after all, is very in the moment. If the moments are all pain, or all deeply drugged oblivion…those are not places we seek to strand her.

My first experience with death was unexpected and terrible. I’ve spent much of my life since then afraid of it, afraid of loss and pain, afraid of fear itself. The kind of thing that hope is, ultimately, an meaningless buffer against, because death waits for all things.

In this place of no hope for endless life or returned youth, Callie is happy. She climbs up on the couch more and more often, with less and less apology when we find her there. She occasionally will run stiff-legged across the yard, laughing at the end. She’s taken to insisting on an extra meal before bed most nights, which we give her. She’ll often prance at the door and shake her head at us–Calliespeak for Hurry up slowpokes, I’ve things to do. Even when it feels as though Death sits beside her on her bed, she continues with life.

Which brings me back to that article…I’ve thought about it a lot over the last year. I’ve talked with people about it. I’ve written a story about it, because writing is my research lab, the place where I manipulate variables until I understand something.

My pondering and my experiments and my life have brought me round to a new place. I’m no longer angry at the idea that life without hope may be enough. Hope is a bridge. Hope has gotten me over chasms that my depression told me were impossible to traverse. When my mind has insisted I stop, hope has suggested I look around the corner first, just to see what might be coming.

But I don’t need a bridge through my whole life. I need to spend most of my time with my feet on the ground, with the grass brushing my legs, or the snow chilling them, or the water washing them clean. There is still much to be said for a life in which I will never be depression free, in which Callie will eventually reach her end. There are still moments of snow drifting free of the trees in a sudden shimmer, of laughter over a ridiculous joke. There are still extra dinners to be had before bed.